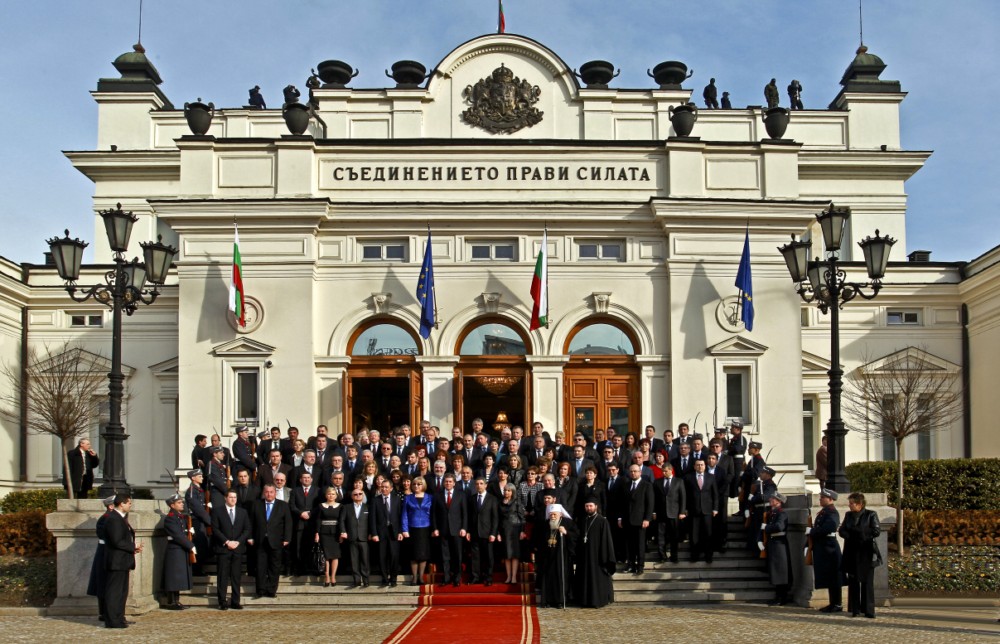 According to its Constitution, Bulgaria is a Parliamentary Republic, a unified state with local self-government. The official language in the republic is Bulgarian, and the religion of most Bulgarians is Eastern Orthodox Christianity. The national state emblem of the Republic of Bulgaria is an upright golden lion on a dark red, shield-shaped background. The national emblem of Republic of Bulgaria is depicted on its state seal. The flag of the Republic of Bulgaria consists of three colors: white, green and red, laid horizontally from top to bottom. The country’s national anthem is the song Mila Rodino (Dear Motherland). Bulgaria’s capital is Sofia. All citizens are equal before the law. No limitations on rights or privileges are allowed because of race, citizenship, ethnicity, sex, national origin, religion, education, beliefs, political affiliations, personal or social position, or property status. The state authority is divided into the legislative, executive and legal branches. The political life of Bulgaria is based on the principle of political pluralism.

The basis of the Bulgarian economy is free economic initiative. The state creates conditions for the free development of science, education, and the arts and provides support for them. The state also makes provisions to preserve the country’s historical and cultural heritage. According to the Constitution, the basic institutions of the state include the National Assembly (Parliament); the President; the Council of Ministers; legal bodies such as the courts, the prosecutor’s office, and the office of investigation; the Constitutional Court; the Higher Court Council; and other organs of local self-government. The National Assembly is vested with legislative authority and exercises parliamentary supervision. The President is the head of the state, embodying the unity of the nation and representing the Republic of Bulgaria internationally. The Council of Ministers is in charge of and enacts the external and internal policies of the country, in conformity with the Constitution and the laws of the land. The legal authorities defend the rights and the legal interests of citizens, of juridical persons, and of the state. Since the country’s liberation in 1878, Bulgaria has been governed by governments led by 50 Prime Ministers. The territory of the Republic of Bulgaria is divided into municipalities and counties. At the moment, there are 264 municipalities (LAU 1), 28 administrative areas (NUTS 3) and 6 planning regions (NUTS 2).

The economy of Bulgaria is an open market economy with a developed private sector and a limited number of state enterprises. Bulgaria has been a member of the World Trade Organization since 1 December 1996. Since 1 January 2007, Bulgaria has also been a member of the EU. The Bulgarian economy is characterized by economic, political and financial stability. The country has a strategic geographic location, liberal access to markets consisting of more than 560 million consumers, and the lowest corporate tax in EU - 10%. Investments in municipalities with high levels of unemployment enjoy tax-free status. There are also increased amortization norms (of 50%) for investments in new machinery, manufacturing equipment and other apparatus, computers, peripheral computing devices, and software. Bulgaria offers tax credits in accordance with special provisions for VAT assessment for the import of material related to investment projects amounting to more than 10 million BGN. There are also provisions for a 5% tax upon dividends and a 10% “flat rate” tax on the incomes of physical persons. Bulgaria enjoys the lowest operating costs in the EU. The level of national indebtedness and the state deficit for 2011 is also among the lowest in the EU. Bulgaria is one of three countries in the EU that has not changed tax rates as a result of the financial crisis. As of 1 January 2011, the country has the lowest tax burden for households and businesses in all of the entire European Union. Its farsighted fiscal policy and stable business environment make Bulgaria one of the most stable countries in the EU.

Bulgaria has a population of 7,351,234 as of 01.02.2011, with 72.9% of its people living in either cities or villages. The country is justly famous for its yoghurt and other dairy products, for its rose oil products, and for its wines and brandies. One of Bulgaria’s preeminent industries is tourism.