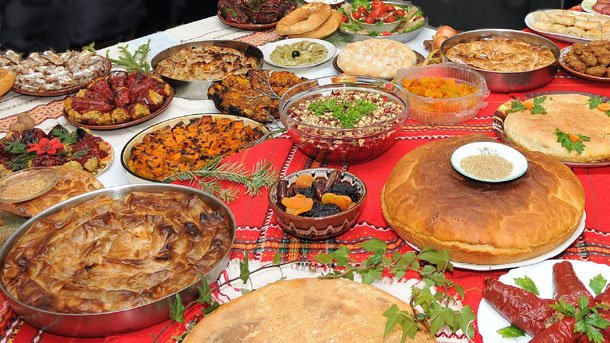 Bulgarian cuisine is exceptionally diverse and delicious, consisting of various salads, breadstuffs, stews, and other local dishes. Many of the dishes are prepared according to traditional recipes handed down from generation to generation over the centuries.

The most products for which Bulgaria is internationally known are yogurt and white brine (feta) cheese. These are almost always present on Bulgarian tables in one form or another.

One of the most famous and most popular breakfast items in the country is banitsa. It is a made of dough with various fillings, such as cheese, spinach, rice, and meat.

Other popular breakfasts dishes include pancakes, buhtas (fritters), mekitsas (fried dough pieces), and fried bread slices. All of these are particularly delicious when served with jam, marmalade, honey or Bulgarian yogurt.

People in rural areas grow vegetables that are exceptionally tasty, which is why salads occupy a central place in our culinary tradition. The most popular Bulgarian salad is the Shopska Salad, but there are also other salads worth trying – Shepherd’s Salad, Harvest Salad, Snezhanka, Monk’s Salad, Dobrudzha Salad, Roasted Peppers Salad, and many others.

One of the most popular appetizers is Tarator (cold Cucumber Soup). It is prepared with yogurt, cucumbers, dill, crushed walnuts and spices.

Some of the most popular Bulgarian dishes are grilled – meat balls, kebapches, grilled meat pieces, grilled sausages, and others. Various stews and dishes in clay pots are also a regular part of the Bulgaria cuisine (hotchpotch and casseroles). These include Chomlek, Kavarma, and Kapama (in the Bansko region).

Another favorite Bulgarian dish is prepared with stuffed cabbage or vine leaves – the leaves used may be either small or broad. The dish, which is prepared by wrapping the filling in the leaves, is very popular in the Thracian region.

One of the trademarks of the Bulgarian cuisine is Cheverme – an entire lamb roasted on a spit. This dish is typical for the Rhodope region, but it is also served throughout the country.

Potatoes are a main ingredient in many Bulgarian recipes. The most popular potato dishes include Ogreten (au gratin), Patatnik (in the Rhodope region), potato stew, and fried potatoes.

Bulgaria’s cuisine also consists of various cold cuts and other meat delicacies. Flat sausage is the most famous of thewse. It is prepared all over the country, but it has the longest tradition in the city of Gorna Oryahovitsa. Another popular delicacy is the Banski Starets (the “Bansko Old Man”). As the name suggests, it is served in Bansko. In Elena and the region known as the Elena Balkans, a specialty is the Elena Pork Leg, prepared with salted pork.

Such delicacies are usually accompanied with a Bulgarian wine, since Bulgaria is justly famous for its wines. Thanks to the country’s unique climate and soils, a variety of grapes thrive here – Gamza (North Bulgaria), the Wide Melnik Vine (in the region of Melnik and Sandanski), Dimyat (in the regions of Varna, Shumen and Stara Zagora), Mavrud (Plovdiv, Pazardzhik, Asenovgrad), Red Misket (Straldzha and Sungurlare), Ruby (Plovdiv and Septemvri) and Pamid (Pazardzhik, Pamidovo and Plovdiv).

Another very popular Bulgarian spirit is Rakia. It is made of grapes or other fruits – plums (in the region of the town of Troyan, Teteven), apricots (in the region of Tutrakan, Silistra, Dobrich), figs, pears, and others. A rose rakia is distilled in the Valley of Roses (in the region of Karlovo and Kazanlak), since this is the home of Bulgaria’s oil-yielding roses.

This brief introduction only touches on the diverse Bulgarian dishes and drinks. To fully know the culinary magic of the country, it is necessary to visit all of the regions where the traditional recipes are proudly maintained and culinary delights are constantly on offer.